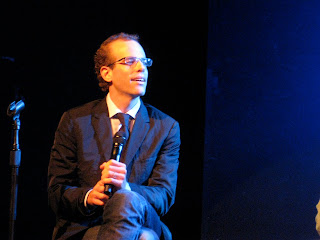 Welp, yesterday's post did not occur because I was busy at Le Poisson Rouge seeing an event with Dan Barber and The Mirror Visions Ensemble.  Dan Barber, if you don't know, is the chef/proprietor of Blue Hill at Stone Barns and Blue Hill in Manhattan - one of the best examples of slow food, sustainable/seasonal food, and deliciousness.  At Blue Hill at Stone Barns, there is no menu - they make a multi-course tasting menu out of whatever they pick from the garden that day/get from their animals.  The menu at Blue Hill in Manhattan changes on a daily basis with items from no further than 250 miles away (although, now 257 miles according to Chef Barber since he found someone he REALLY likes).
The event was a discussion on sustainable farming, as well as his philosophy on cooking - the Mirror Visions Ensemble 'concert a la carte' was a performance based on the menus of Blue Hill at Stone Barns - a bit strange I know, but it ended up being absolutely fabulous and slightly hilarious - listening to people sing opera style about heirloom vegetables is the way to go! When the musicians/singers were talking about a meal they recently had at Blue Hill, they explained how they were blown away by all of the food products they have never heard of - and the fact that there are hen of the woods mushrooms, chicken of the woods, and ALBINO chicken of the woods! And a REALLY GREAT EGG! I have to give it to Barber though, he has a really strong passion about food and ingredients, and doesn't let the big corporate monsters destroy that - he let's everyone get a taste of REAL, flavorful ingredients - he stated that when you give love to growing plants, they take on their own special characteristics that a commercially grown crop never would achieve, which I completely agree with.  He also is honest about the fact that it's not cheap to serve food this way, but to his point, you'd probably spend more money at Disneyworld!  He also made an hilarious fact about summer, how fall is upon us, and TOMATOES - how us tomato freaks, when it comes to the end of summer, have to eat billions of tomatoes because we are all worried if WE ATE ENOUGH TOMATOES!!!! So true, I must say. I most definitely did NOT eat enough tomatoes, and I'm sad the growing season is coming to an end.  On another note, which I didn't even realize until halfway through the show, Marion Nestle and Betty Fussell were there! Two of the greatest food writers around - Marion more about the politics of food, food production, farming, etc. and Betty writes a little bit of everything - she most recently was inducted into the James Beard Who's Who of Food and Beverage! Obviously, I took it upon myself to harass them, and they are both amazing ladies who LOVE what they do and have such a strong passion for food - we talked about farming, ingredients, our mutual friends (really!) - Marion was even just in Battle Creek! ("It smells like cereal!) It's not a lie when people say it's a small world!
I highly recommend picking up some of their books - they're truly inspiring - they're game changers!  All the talk about food made me hungry - as decent as the food looked at Le Poisson Rouge, I opted out and chose to have a few cocktails instead, while reminiscing about the last time I was at Blue Hill! The servers are great - the bartender (Rocky) is absolutely hysterical, and if you can't make it to Stone Barns and you're in Manhattan, Blue Hill is a MUST! 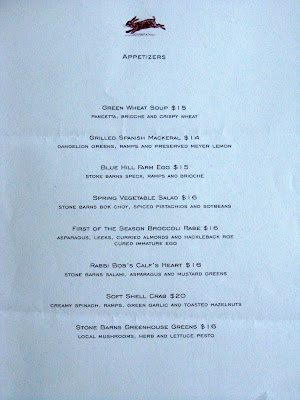 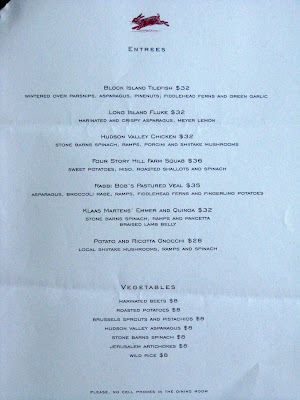 Just check out that menu! Everything on the menu has heart and soul in it, and you can absolutely taste the difference - this time around, I tried the Blue Hill Farm Egg (there is nothing better than a farm fresh egg, tastewise and even colorwise!), the Stone Barns Greenhouse Greens, the Long Island Tilefish, and Klaas Martens' Emmer and Quinoa.  Everything was epic. Clearly, I was so excited, that I didn't even get picture of them! Sometimes that happens (unfortunately) - although I did get a (bad) picture of the amuse bouche:
Asparagus sliders!!! One bite, all too delicious, and you were left with nothing more but the memory of how amazing it tasted - the Times recently wrote up a piece about Blue Hill's slider - this time of year, tomato.  I may need to make an appearance JUST to try them! It's amazing how something so tiny and so simply can be so flavorful!
In honor of Mr. Barber and his philosophy on food, I urge you to go to the farmer's market, pick up whatever random (it's more fun that way) and cook it! Go crazy! Honestly, when you get anything in season, you really can't go wrong. What grows together goes together!
I didn't even know what to do with these squash runners from the farmer's market, but I was clearly intrigued. Sauteed up with a little olive oil, thinly sliced onions, salt and pepper, and blanched cranberry beans? Outrageous! If only the cranberry beans could retain their colors after cooking - but alas, everything can't always be perfect! 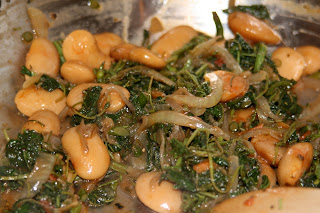 A recipe can't get miuch easier than this - fire up two saute pans, one for the veg, one for the fish. Swirl about a tablespoon of olive oil in one pan, and as it heats up, toss in your onions, carrots and radishes (and whatever you've picked up!) - cook this until fork tender.  They should still be a bit toothy, but still have their natural flavor.  For the fish, heat up about a tablespoon of olive oil (make sure it doesn't burn!) and pan sear it, flesh side down. Again, with fish, it will let you know when it's ready - if it doesn't want to move, it's still busy cooking!  When you're able to flip it, do so, and cook for about two minutes until it's just cooked through.

Sidenote, overcooking seafood (really anything) is a terror! You lose the flavor, the flesh dries out, and it's just straight up not tasty.  I like to cook my fish about medium-rare to optimize the flavor and texture.  When the vegetables and fish are ready, plate the saute topped by the fish, and finish it off with a little sprinkle of sea salt and freshly ground pepper.  If that's not the flavor of the earth, I don't know what is! 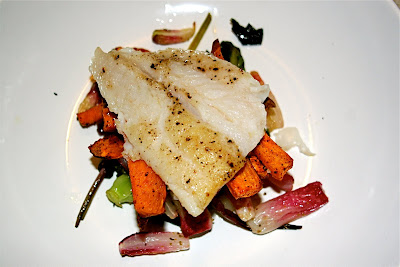 If you can't get anything fresh as can be, the simpler the better.  You really want the flavors to shine through, so any spices or sauces are truly unneeded.  With light cooking, the vegetables become tender, and the earthy flavor comes through. Dan Barber is right - you really CAN taste the love that goes into it!
Email Post
Labels: betty fussell carrot cranberry bean dan barber marion nestle radish squash runners tilefish