Loungin at the barbeques, drinkin brews
with the neighborhood crews, hangin on the avenues
Ah, a barbecue with Biggie. That sounds about right to me. JAY BE this one goes out to you.  It all began when boyfriend decided he wanted "ribs" for dinner. That one word resulted in an extended galavant around town - east side, west side, uptown, downtown - just for the perfect summer (mind you indoor) barbecue dinner!
Thoughts in sequential order: DINOSAUR BONES (more on that in a second)!! How should I make the best rub?! Who has the best ribs?! What are the best side dishes to make this perfect?! Yes, as soon as one idea is in my head, about a thousand other questions come up so it turns out to be the perfect, well-rounded meal, which is fun, albeit sometimes exhausting if I'm really ambitious.
Dinosaur bones you ask? Why yes. Another name for beef ribs, but let's be honest - dinosaur bones is way more fun.  This was the first thing I could think of when I heard the word "ribs" - a recent issue of Bon Appetit magazine - the Summer Grilling Guide. I cannot TELL you how tempted I was to start a mini bonfire in my apartment. Mainly, I was intrigued by the dinosaur bones with the - you got it - chipotle-cherry barbecue sauce.  Maybe it's the child in me that couldn't get "dinosaur bones" out of my mind but hell - the sauce was AMAZING. So, check THAT off the list.
So began my epic adventure in city ribs - I bought an amazing rack of ribs from L. Simchick just down the street - they have BEAUTIFUL cuts of meat at very reasonable prices. I was hoodwinked into buying some of their home-smoked bacon and a nice looking bone in chicken breast (what?!).  From there, I traipsed my way to the Westside, because Zabar's seemed like a logical place to pick up my ingredients. Why not pass 100 other grocery stores on the way!? Indeed it was worth it. A few hours later, armed with goodies and a few other unneccesary things - ONWARD HOME!!
Next step. RUB!? Umm. What's in my pantry? I believe this is what it amounted to: 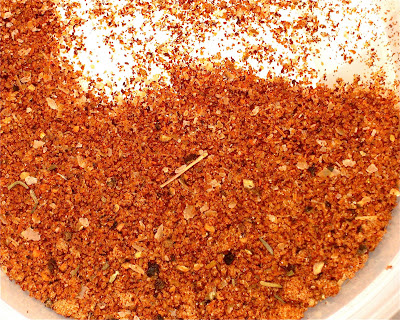 Yes, I know, this is like an old grandmother's cookbook from the 18th century. So I like throwing things around and not measuring, so be it! I'll start measuring soon enough though, so I can start legitimately sharing my goodies with you all!  My theory on this one was mix it together until it SMELLS like barbecue. But really, go by your senses - they'll never fool you. Be sure that you  can really smell each of the ingredients individually, without having any one overpower the others. With ribs, you really have to RUB the spices in (hence...rub?). I'm talking, roll up your sleeves and give each half slab a nice little massage, and THEN wrap each in foil, and let them chill out a little, so the ribs and spices can become best friends. Believe me, this is an important step! When wrapping  the ribs, remember to double wrap them, and also leave some areas on the end, so it almost looks like the ribs are in the middle of a tube - important for later!
This is where the fun begins! Turn your oven on to 250 degrees - when it comes to cuts of meat like this always remember, SLOW AND LOW. I've even made ribs at 150 degrees for a longer period of time. Also delicious. But today, I was in a RUSH and only had three hours! Now, this cooking method was adapted from Alton Brown, and it is genius. By 'braising' the ribs, the meat stays extra moist, especially at the higher temp, and it doesn't take as long to cook it.
Once your ribs have sat and chilled with the rub for some time, warm up a braising liquid to pour into your foil tube. Mine consisted of the following:
Mind you, when making something like this that only slightly imparts flavor into the meal, vinegar is vinegar, and something syrupy and sweet is generally the same - you could use ANY kind of vinegar, and you could use honey, regular molasses, or even maple syrup if you feel like it. Pour half into each of your rib tubes, curl up the ends of the aluminum foil, and place in the oven for 2.5 hours. And leave it ALONE. DON'T EVEN THINK ABOUT LOOKING AT THEM!
To go with the ribs, I also made a light cilantro-lime coleslaw to cut through the barbecue goodness of the ribs, as well as some root-beer baked beans. Oh yea, and that BARBECUE SAUCE! I'll leave that to you - check out the recipe HERE!
BY this point I was overwhelmed by the heaviness of everything I was making - so the slaw cheered me up a bit. All you need is to dress about 3-4 cups of shredded lettuce, cabbage, or whatever you want with this mixture:
Brilliant! And for the beans (this is where that home-smoked bacon came in handy - they don't say bring home the bacon for nothing!), I'll keep this post short and let you use your imagination with another of Bon Appetit's recipes. Seriously though, it is totally unnecessary to have this in a crockpot and stick it in the oven - you can do it on the stove if you watch it carefully. Either way! Again, for any recipe you get from a cookbook or a magazine, I urge you to use your imagination - it's more fun that way!
By the time you're done with all this malarkey and then some, your ribs are probably ALMOST READY. This is important step number... I'm not sure but it's important. When your ribs are done, no matter how you make them, take them out of the oven and let them sit for at LEAST a half an hour in a brown bag.  If you're braising them, be sure to pour the liquid out, open up the foil, then seal the brown bag shut. This creates a sort of slow steam for the ribs - believe me - it's worth the extra step.
When all that hullabaloo is over, turn on your oven to BROIL (or grill if you have one and live in a place that is not Manhattan), slather on some barbecue sauce, and let those puppies caramelize into some tasty goodness.
Done this way, you'll have some fallin' of the bones, finger lickin' good, spicy, sweet, savory, delicious ribs.  Be sure to wear a napkin in your collar!