time to swim with the fishes

How is it that some foods are, for the general public, notorious for being nasty? I can understand being averse to eating crickets and still wriggling octopi, but who are the ad-wizards who decided it was a good idea to hate on things like brussel sprouts (or cruciferous veggies in general), beets, liver (COME ON), and SARDINES!!!  Somehow, people still like Spam?? People, get with the program. First of all, I blame the fifties - the general housewife's recipes led to cooking the hell out of whatever it was you had on hand. Brussel sprouts blow my mind (nevermind the fact that the way they grow is awesome); beets are ridiculous (hello Chioggia beets), ESPECIALLY when you cook the greens; I'm not even going to get into liver, lest PETA comes after me; and SARDINES!
Let's talk about sardines for a hot minute. Number one: they do not grow in cans. Two: they are in fact named after Sardinia. Three: they are DELICIOUS!! There is absolutely not reason for anyone to have a fear of and/or make a nasty face when they hear the "sardines".  The key to everything in life is getting it fresh and cooking it right! That being said, why don't you find some fresh sardines from your local fishmonger and give them a shot? They're fun to prep anyway!  I picked up a couple of happy looking (well, happy to me, not so happy for them) sardines from Pisacane this morning - super fresh, clear eyes, pink gills, firm flesh, and skin with a nice sheen to it.  Contrary to popular belief, sardines are pretty big (at least compared to what most people are used to - the canned variety). These guys were about 6 inches or so long. 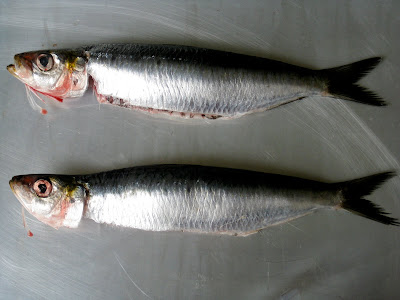 You can get your fish prepped by your fishmonger if you don't want to fiddle with it to much - cleaned, gutted, scaled, and even filleted.  I obviously like to work with my hands, so I took it upon myself to do so (minus the scaling, they have a neat tool for that).  When you cook sardines, you CAN cook them as above, or you can butterfly/fillet them yourself.  I recommend butterflying them just because it'll take the time and pain out of getting rid of the bones when you're trying to eat it. As far as butterflying the sardines, it's really simple! First,make an incision just behind the gills, all around the head, being careful not to cut through the spine.  Make a similar cut near the tail end, or even just chop the tail off, right at the end of the fin.  Finally, make sure to cut out the dorsal fin by making shallow incisions all around it, and pulling it out.
Now comes the fun part! Grab the sardine head with your left hand, and pinch the flesh where you've made your incision. Squeeze and push down until the spine starts coming loose, and pull it right out! It's almost the same motion as pulling rosemary leaves off the stem except....this is fish and not a plant.
Easy peasy! This should've gotten the majority of the bones out, but double check on the filet if there are any little pinbones left and try to get rid of them. On a side note, see how pink the flesh is? That is the sign of a fresh sardine, as opposed to the whiter, paler flesh we often see. So, onto the rest of the recipe! Prepare yourself with a bulb of fennel, a lemon, some olive oil (or butter if you'd like), sea salt, and fresh ground pepper.
First, grab some fronds off of the fennel - they have a nice subtle anise taste, and look nice on the plate.  Place these in some ice water for a few minutes to crisp and 'wake' them up - after, place them on a paper towel to drain.
Now take your fennel bulb and slice it cross-wise, about 1/4 inch thick.  You can get rid of the butt-end because it's mostly the core.
Heat up a saute pan over low heat - swirl in about a tablespoon of olive oil (or butter, or a combination if you wish).  Once the oil is shimmering, place the fennel slices into the pan, and let caramelize for at least 15 minutes.  Don't touch them or flip them! Leave them be and wait for the amazing smell to come wafting through your kitchen. 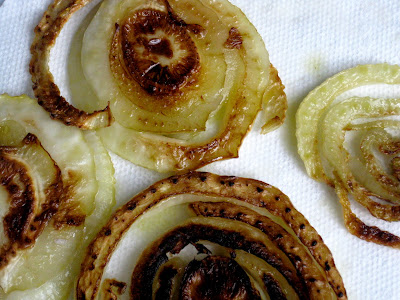 When the fennel is caramelized, remove it from the pan and add a little bit more olive oil.  Sprinkle your sardine fillets with salt and pepper, and place flesh side down. Cook for only about two minutes. With fish, it will let you know when it's ready to be moved - it won't stick to the pan and you can either flip or remove it easily with a spatula. 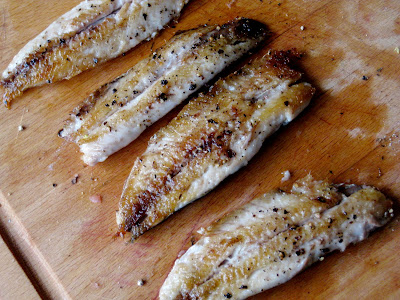 While the fish is cooking, zest a lemon with a micro-plane grater, bust out your fennel fronds, finishing salt, and olive oil and get ready to plate! 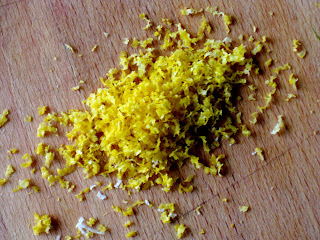 Presentation wise, I wanted to have everything kind of linear - individual slices of fennel, sardine (skin side up), a dribble of olive oil and lemon juice, fennel fronds, and lemon zest.  I also sprinkled some magic dust (aka fennel pollen) over top to really add a little something special! 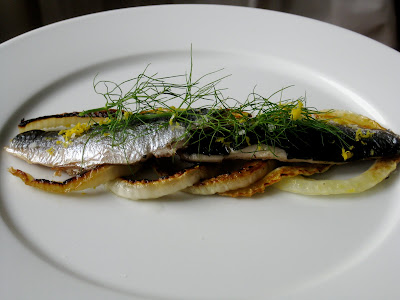 On a side note, I want to introduce you to my children aka my arsenal: 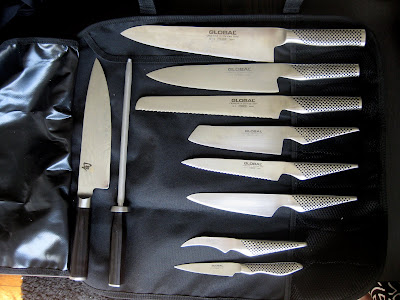 I started my Global collection quite a few years ago when my godmother bought me one for Christmas. I've been addicted to them ever since - they have a great feel and weight to them, and are perfectly balanced.  The Shun Classic on the left is my newest toy, and it really is a brilliant knife as well.  If there is one thing in you're kitchen that you absolutely NEED, its a good, well-made, sharp Chef's knife. It's worth the investment!
Email Post
Labels: fennel fish lemon sardines