What a way to end the workweek and begin my (fake) weekend - as soon as I stepped foot in my apartment after work, I received a message from my friend Nick, wondering if I was at the Wildman portfolio tasting.  Clearly, I was not, and obviously I needed to be.  Fortunately for me, it was literally around the corner at Guastavino's - a space that I didn't even know existed, hidden behind the Food Emporium under the 59th St. Bridge.  Before I move too quickly into the food and wine, let me just say that it was one of the most beautiful spaces I've seen in a long while - it's a giant, sprawling space with gorgeous tiled, vaulted ceilings AND a private garden. Brilliant!
Moving on, this was Frederick Wildman & Sons 2010 Portfolio Tasting - that being said, there was much wine to be tasted, from all over the world: France, Spain, Portugal, South Africa, Australia, the States, Italy - you name it.  There were over 100 tables of different producers, and the tasting took over the entire 25,000 square foot interior.  Fortunately, I had Nick to guide me in the right direction and weed out the relatively crappy wines.  A table of note was that of Enoteca de Rham with wines from a selection of boutique wineries throughout Italy.  They had some amazing Montepulciano d'Abruzzos, Barberas, Barolos, Amarones, etc.  Three producers of note were La Stoppa (Emilio-Romagna), La Spinona (Piemonte), and, most importantly, Le Ragose (Veneto).  Wines from Veneto have a special place in my heart - Amarones and Valpolicellas tug at my heartstrings, and one of my favorite wines in the WORLD (that I can never find) hails from Veneto - Masi Osar, 100% Oseleta grape - more on that later. 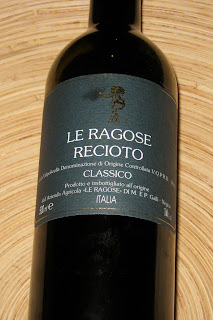 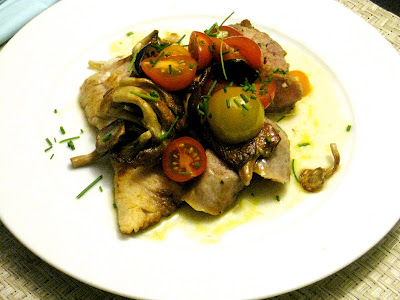 It may sound like an odd combination at first with all the different flavor elements but this was great - the fennel sausage was very subtle but added a nice savoriness and earthiness to the dish, as did the mushrooms. This was a great meal for the type of day it was as well - a little chillier and fall-esque, so all of these feel-good flavors made it a pretty cozy dish.
This was a great dinner in general - good food and good wine, and being able to talk food and ingredients with a chef.  I am still salivating over the crab crostinis and may need to make some more tomorrow, because it is JUST that good.
Email Post
Labels: crab crostini fennel mushroom orange sausage skate tomato zest