I really do love pasta - I mean, not in the sense that I would go to Olive Garden and get their "Never Ending Pasta Bowl" because quite frankly, that is just straight up foul. And it leads me to believe that there is something wrong with this world!
But seriously. Pasta. It's so simple - a little flour, a couple eggs, maybe some extra yolks for the golden color, a touch of olive oil for smoothness, and maybe a pinch of salt. But it's really so much more than that - you can take any old recipe you want, but chances are it won't come out perfect. You need to know the right texture, the right color, the right consistency...if you don't have the warm hands like the Mammas in Italy that have been using the same recipes for generations. And that's why I love making pasta - it's the history, the love that goes into it, the stories told around making it, how it brings everyone together - and THEN comes the fun part (read: eating).  I remember growing up watching my parents and chef friends using our pasta machine to crank out sheets and sheets of pasta by hand and I thought it was the greatest thing ever! But I sure as hell had no idea what I was doing. I recommend reading The Lost Ravioli Recipes of Hoboken: A Search for Food and Family (thank you Ari Weinzweig!) and if that doesn't make you love it, you are a LOST SOUL and get none of mine. EVER.
The first couple of times I made pasta - it was a straight up FAIL. Play-doh would've been better. And let me tell you, kneading those balls of pasta dough properly is a tricep workout, that's for sure.  I started getting the feel for it, and that's when I realized you really can't follow a recipe, you've gotta FEEL it in your hands and there's no way around it! But once you've got it down, all you want to do is make pasta. All shapes and all sizes, testing out the shapes to see what really IS best for what kind of sauce, and just plain having a good time - frankly its like being a kid again because flour gets ALL over the place.  My mother is lucky I never found squid ink back home, or it would've been a serious disaster. Then I somehow finagled my way into Wolfgang Puck's kitchen and was taught by Execute Chef Mark Djozlija how to make their amazing Corn-filled Agnolloti with Truffled Corn Puree.  It was all down/uphill from there. Needless to say, I have now gotten it down, and now I am AGGRESSIVE.
This is going to be a straight up VINTAGE post - a swirling montage of my pasta making history. Ok not really...just a couple instances. Well, one. But still.
UOVO IN RAVIOLI!!!
The first time I read an article about SD26's uovo in ravioli, I nearly lost my mind. I wasn't in NYC at the time, so clearly I had to be resourceful. Research, research, research! This is actually a classic dish originated in Bologna, in the Emilia-Romagna region of Italy and it is stunning.  The ravioli is filled with a ricotta/spinach mixture, which is piped out in a tube where an egg yolk is held. I sauteed my spinach, chopped it up, and clearly added some truffle salt to the mixture (always necessary).
Then, after separating a few eggs, the yolk is gently poured into the space - you need to make sure that your piped ricotta mixture is really tight and glued together so it doesn't topple over like Pisa!
Now, the even more nerve-wrenching part - placing the second layer of ravioli over the top of these little towers - it's like trying to lay a satin sheet over Henry the 8th while sleeping and not trying to wake him up.  Once that's all said and done, the ravioli are stamped out with a cookie cutter, or cup, or whatever is round and large enough to engulf the entire thing...and after two minutes in some seriously salted, boiling water, this treat comes out! 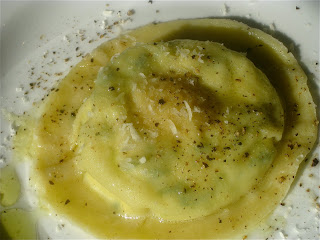 Most recipes call for an obscene amount of butter/truffle butter/whatever for the sauce, but frankly I think that's unnecessary. I mean, don't get me wrong, butter is great in moderation but when it overpowers everything else in the dish a la Paula Deen, sometimes Ina, and my chefs in my kitchen? Come on! Let the ingredients stand out on their own! I put a little bit of fresh ground pepper, truffle oil (duh), and parmesan cheese on top...the best part is when you cut into it.... 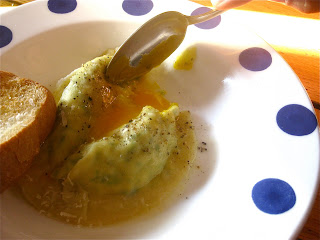 The yolk oozes out and creates it's own sauce with the bit of pasta water that is lingering on the plate, the ricotta mixture, and the truffle oil. It is 100% heavenly.
I did finally get the chance to go to SD26 and try Chef Odette Fada's infamous version: 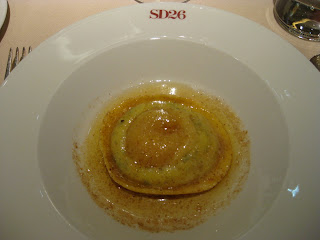