To think that jammin' was a thing of the past. I'm pretty sure Bob Marley was speaking about canning and preserves when he sang these lyrics! People do think that jammin' and canning is a thing of the past - but how can you help but make preserves at the end of summer with all the gorgeous fruit at the market?! Wild strawberries, fresh lychees, golden raspberries, Reine-Claude (green gage) plums...I couldn't resist.  Making preserves is also so easy - granted, you do have to sterilize the jars (more on that later!), but it's not too much of a tedious task.
For the first jam, I simply made a strawberry preserve, with a bit of lemon peel in it - an adaptation of James Beard's Sunshine Strawberry Preserves - you'll see where the sunshine comes in later!  If you can't find wild strawberries, you can always use regular strawberries and cut them into smaller pieces.  First, hull the strawberries, and place in a large saucepan.  Peel one lemon, being sure to cut off the pith - the white part is really bitter so you won't want that in your preserves. Just go at it with a sharp paring knife and you should be good to go. 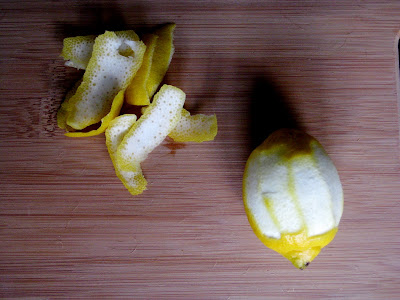 Mix about equal amounts strawberry with sugar, or less - I'm not the biggest sweet fan, so I use a little less - especially considering these little strawberries have so much natural sweet flavor all packed into their little selves - and add in slices of lemon peel.  Squeeze the entire lemon over the mixture and stir to combine.  Let this sit for at least an hour - you could even let it sit overnight, covered, to macerate. 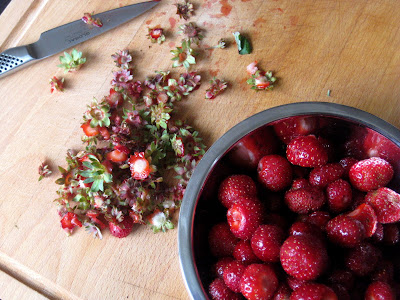 After the strawberries and sugar have rested, stir to mix and pop it on the stove.  At this point, you're going to melt the sugar - bring the mixture to a boil, stirring carefully to ensure that all of the sugar crystals aren't stuck to the bottom of the pan - lower the heat, and simmer for about 5 minutes.  Once all of the sugar is dissolved, pour the mixture into a sheet pan and place in a sunny spot during the daytime (sunshine strawberry preserves!) - you can put plastic wrap or anything clear over it.  I did this for a while, but I'm clearly impatient, so I let it sit in the sun for as long as possible, then placed it in a warm oven (about 150-200F) until the syrup got thick.  That's it! Once the syrup is to your desired consistency, pour it into sterilized jars, and you are all set! 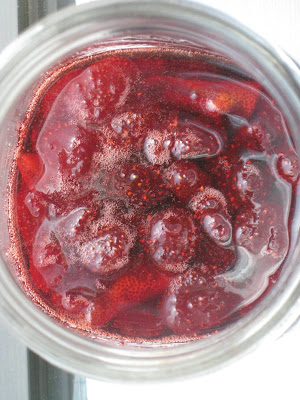 These preserves were epically delicious - just sweet enough, and the taste of the wild strawberries was super intense - so intense that it was almost as if I added strawberry flavoring to the mixture.  Even BETTER is that I now have a delicious strawberry syrup to make cocktails with! Maybe even with Champagne - it would add a great color and flavor.  Bubbles here I come!
For jam #2, I made a Reine-Claude Vanilla Bean preserves.  The process is just as simple as before - cut up the plums into quarters or so, remove the pit, and mix in a saucepan with about just as much sugar, and the juice of one lemon. Let this macerate for a couple of hours, or overnight, and you're ready to jam! Before cooking down the fruit mixture, cut a vanilla bean in half and scrape out all of the seeds - put the seeds and pods into the mixture, stir, and cook it up! Bring the mixture to a boil, stirring occasionally.  Lower the heat to a simmer and cook until the mixture has reduced to a nice syrup.  Once it reaches this stage, remove the vanilla pods and transfer to a sterilized jar. 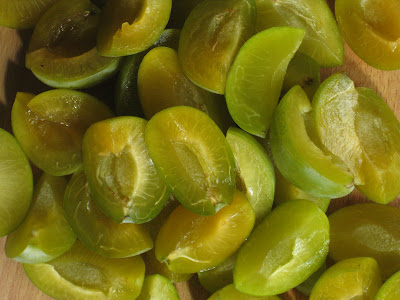 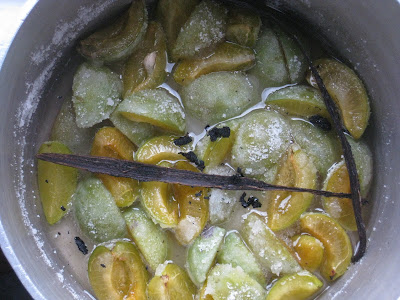 The resulting preserves for this has a gorgeous yellow-green hue with the vanilla beans dispersed throughout.  It's a great combination as well - something I would probably serve over ice cream or with a nice fresh ricotta on a slice of baguette. The vanilla is pretty strong in this but there is still a slightly acidic taste to counterbalance it from the plums.
For my third and final preserve (for the time being), I made a Lychee, Golden Raspberry, and Rose Preserve.  First, the lychees need to be peeled and pitted - I love the look of lychee peels! They have the most beautiful hue to them - a rosy, orange, magenta - and the scent of fresh lychees is just divine.  It's subtle, sweet, and floral - similar to the taste. 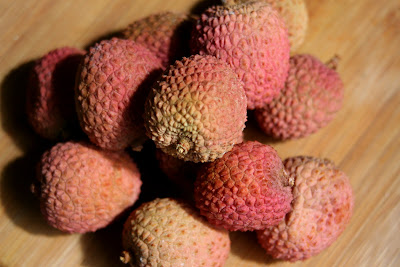 Again, peel and pit the lychees and cut them into a big chop (in halves or quarters).  Add the raspberries, mix in an equal or bit less amount of sugar, and squeeze in the juice of one lemon.  Stir it up and let this sit for an hour or two, or overnight, and go at it like the previous preserves!  Bring it to a boil, stir - but this time, add a splash of rose water - and simmer until it becomes nice and syrupy. 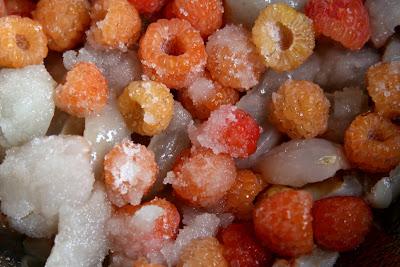 The combination of flavors in this was fantastic - the golden raspberries are a bit more delicate than they're more colorful cousins, so mixing it with lychees and rose water seemed to be a great combination.   The rose water is just enough to taste it, but not enough that you really realize WHAT that exact taste is.  This may be perfect for a panna cotta topping!
Altogether this was a really fun project - I'm not too used to canning or preserving, but the process is obviously quite simple.  Just pick any fruits you wish, make some odd combinations, add some sugar and let it hang out!  If you aren't going to use it immediately, you MUST sterilize some jars - and they have to be Bell jars or similar, with the two part screw-on cap - this will allow a vacuum seal to be created so the preserves can keep for a long time.
That being said, start jammin.  Fall is upon us (sadly) and why not preserve what's best to eat in the winter time!
Email Post
Labels: canning lemon lychees macerate plum preserves reaspberries reine-claude vanilla